Here are a series of videos I did in my trusty ol’ Zoom Room about rational functions. The PDFs I use in my sharescreens are my own creations, with the exception of the artworks on them, which are complements of google images and meme makers. They used to be Promethean slides, which is why they sometimes look a bit skewed. Each video is one lesson in a unit on rational functions that I would normally teach in a classroom full of students. So what’s missing here is the other voices–it feels strange for me to just babble on without interruption. I encourage my students to interrupt me with questions, and they do, constantly. These lessons are normally much more of a dialogue than a lecture.

This is a walkthrough of the basic principles covered by my famous (in my school, anyhow) Mother Function Project. The student handout is linked in the sidebar (or at the bottom if you’re on the mobile site) under the Links to Math Lesson Plans menu. Yes, I know that we call them “parent functions” now. But I teach middle school, and the sly snickers I get when I say “Mother FUNCTION!” are priceless. Let math teachers have our fun!

Normally, I would not be going over all the observations with the students beforehand. The video models the thinking I hope that they achieve by the end of the project. And in this particular case, the video was made during remote instruction for those who didn’t manage to make it to the original zoom lesson, or who really struggled with the concept (I had to have a sub teach it this year).

Usually, this exploration/assessment comes near the end of the year, after they have studied all these function types in their own right. Then I ask them to do this:

You will be creating a series of graphs in Desmos, importing them into a google doc, and reflecting on the changes after each graph. The final project will be submitted to me both digitally and as a paper document that you have printed and highlighted.

“The related function is shifted to the left 5, and is increasing faster.” 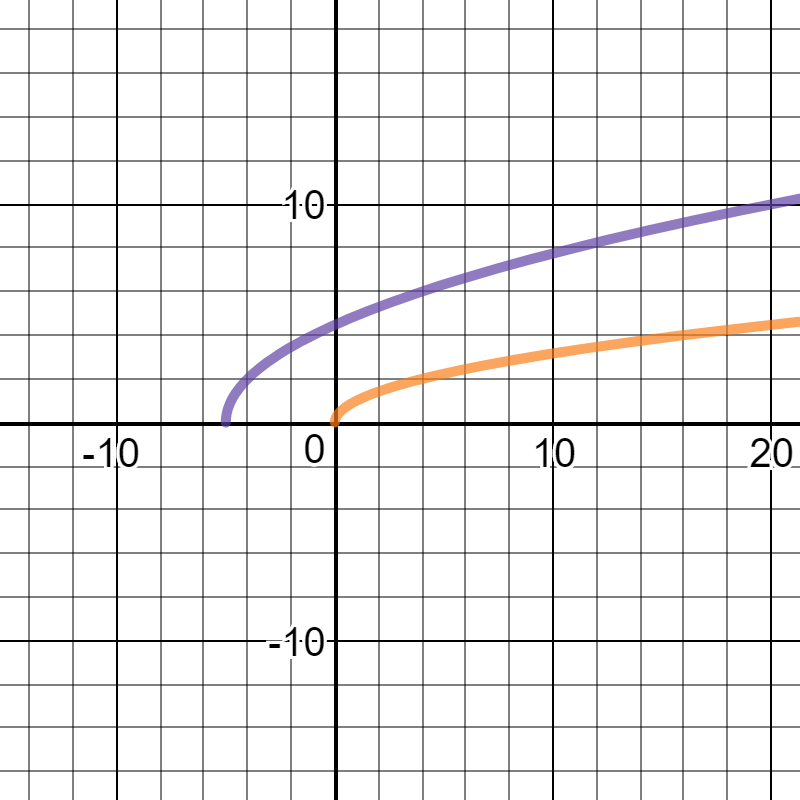 So the observations you see me making in my video are the kinds of observations that I want my students making independently. The goal here is to get them to see that across all function types, when you do certain things to the equation of their parent function, the graph changes in predictable ways. For example, adding a negative sign to the coefficient of the first term of any of these functions causes the graph to “flip.” Adding +3 or -5 at the end causes the graph to shift up or down 3 or 5, respectively.

To ensure that they get a good look at all the shifts, I provide a list of functions for them to graph:

Exponential functions: y=abx (we will use y=2x as our mother function)

The idea here is that they will have seen what happens in each type, and they will see the commonalities. Part of the challenge of this project is that they students need to use accurate, descriptive language and appropriate mathematical vocabulary. So believe me when I say that my jaw feels like it’s going to fall off from the number of times I have to say, “Parabolas don’t have a slope! At least not till you have to calculate the slope of a line tangent to it at a point, and that’s not until calculus! Slope is for lines! It even has its own special formula! Use another word!”

After they write their observations, I challenge them with some questions:

This forces them to really look at their observations and synthesize an over-arching theory of what changing the equation does to a graph.

In the linked worksheet, you may notice that I ask my students to complete a problem set on a textbook page. This can be any problem set in which students are given an equation, for example y=-2x2 – 3, and asked how it will shift from the mother function, y=x2. They should be saying things like, “The parabola narrows because the coefficient is less than -1. It will be upside down because it has a negative leading coefficient. It will be shifted down three, and it’s y-intercept will be (0,-3).”

It is also useful to hold a peer-review session before we turn these in. Students read each others’ work and discover all kinds of new ways to think about the shifting graphs. They also catch each others’ mistakes, resulting in a better learning experience overall. I don’t consider this “cheating.” Learning happens in math when we have math dialogues. The end result is that the student who made a mistake talked about it with a peer, hopefully understood better, fixed it, and learned something. And if they learned something, then their grade should reflect that.

Another great thing about this lesson is that it also covers both criteria B and C for IB MYP mathematics. (That’s pattern recognition and communication, respectively. And IB MYP is International Baccalaureate Middle Years Programme. Yes, with an e. I don’t make the rules of international spelling.)

I look forward to teaching this lesson all year. Not just because I get to holler, “Hey! Look at the asymptotes on that mother function!” every few minutes, but because it puts so much of the learning on the students. The direct instruction you see in the video is so much less effective than when they figure it out for themselves. When they make these connections without being directly told, they are building knowledge and understandings that are deeper, more meaningful, and stick with them for a long time.

Looking at a handshake in Wireshark